How Long Do Squirrels Live and Other Interesting Squirrel Facts

One of the most frequently asked questions about the wild creatures we see around our homes is “How long do squirrels live?” These bushy tailed creatures scramble up trees, walk across wires, and feed on nuts, fruits, pine cones, all within sight of our front door step.

Let’s learn a bit more about these curious garden creatures that are such a common site.

How Long Do Squirrels Live?

Lifespan actually varies quite a bit from one squirrel species to another. It also depends on if the squirrel survives its first winter.

The sad truth is that the majority of squirrel kits don’t survive their first year. They often get picked off by predators or a disease that causes them to get very ill. But, those that survive the first year can often live for many years.

The grey squirrel, commonly seen in many parts of the world, including Wales and England, can expect to live up to 6 years. Some of them have lived up to 24 years when kept in captivity.

The Eurasian red squirrel can live up to 7 years in the wild. In captivity, they can make it to 10 years.

What Is a Squirrels Breeding Season? 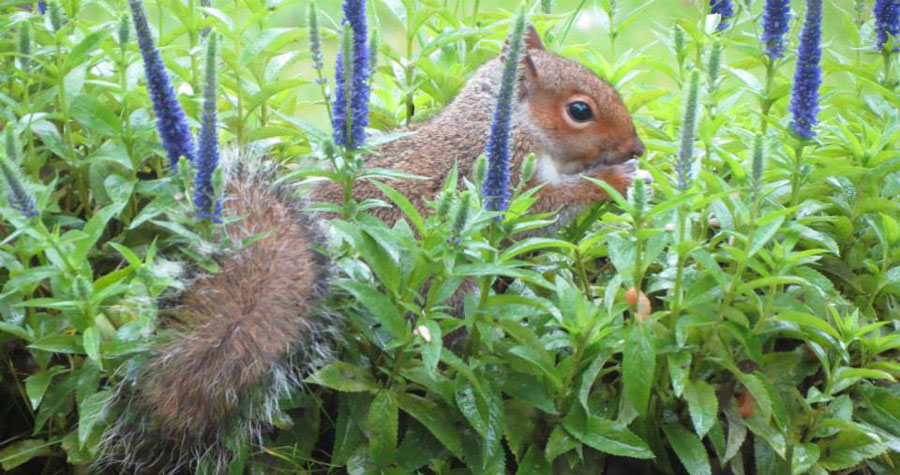 A squirrel’s breeding season is the time when the female is fertile, capable of becoming pregnant. The actual time for a particular species varies just as it does for age.

Grey squirrels start breeding when they reach a year old. A young grey squirrel female will become fertile once a year, while older mature females go through two breeding seasons each year, once in the winter and once in the early summer.

The Siberian flying squirrel has a longer breeding season, starting in March and going through July.

How Long Do Squirrels Rear Their Offspring?

Baby squirrels are always raised by their mother who nurses them, cares for them, and protects them from predators while they are still in the nest. Measuring how long a mother squirrel will rear their offspring isn’t always straightforward.

Some squirrels leave the nest as soon as they are weaned. Others stick around for a few more weeks while they gain body weight and foraging skills. A select few are already foraging by the time they are weaned.

For example, the grey squirrel weans their kits at about 10 weeks, though it can be longer in colder climates. The kits will start to leave the nest at about 12 weeks. If the kits are born in autumn, they may winter with their mother before going out on their own.

The red squirrel wean their kits between 8 and 10 weeks of age. However, the kits may be eating solid foods by 6 weeks and venturing out to forage shortly after.

Where Would You Find a Squirrel Nest?

Squirrels use their nests to protect their young and to keep warm during the winter. Where they make their nest mainly depends on the species of squirrels. Some squirrels build their nests in trees, while others make theirs in the ground.

Tree squirrels are the ones you most likely see hanging around your garden. They will build their nests in hollowed out parts of the tree, or use twigs and leaves to build a nest in the branches. These leaf nests are called dreys by the way. The grey squirrel and the red squirrel both nest in trees.

Where Do Squirrels Nest in Winter?

Squirrels often use the same nest they make in the summer to get through the winter. Even the leaf nests high in the trees make a warm place to get through a cold winter.
Many squirrels will share a nest during the coldest part of the winter, offering each other communal warmth. This is a complete turnaround from their usual territorial behavior during the warmer months.

Shared nests are usually segregated by gender, though, in some species, a mother may share a nest with a mixed litter of older kits for their first winter.

Most squirrels do not hibernate. However, many will sleep through the coldest days, only venturing out when there’s a warm winter day or plenty of sunshine. The few squirrels that truly hibernate for a lengthy period in the winter usually nest in the ground and live in very cold climates.

What Do Squirrels Drink?

Typically, squirrels drink water. However, they love the taste of sugary human drinks on occasion. If you leave a sugary beverage out in your garden, you are likely going to have one or two of these furry creatures taking a taste for themselves.

Yes, squirrels can eat bananas, as well as a number of other fruits including grapes, blackberries, strawberries, and kiwi. They love the sweetness of the fruit. But, like other species, they don’t need to eat too many sweet treats. Setting them out on occasion makes a great snack for your garden friends. Just don’t do it every day.

Bread is not good for squirrels. While they will eat it quite readily, it doesn’t digest well in their stomach and intestines. They also get very little nutrition from the bread. Plus, if they eat it often enough, they are less likely to eat the natural foods that they digest easily and get the most nutrition from. 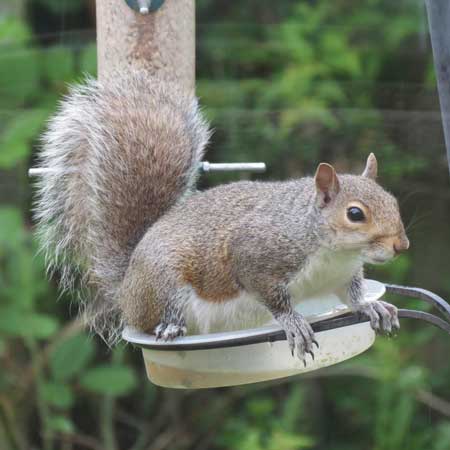 How Can I Attract Squirrels into My Garden?

To bring squirrels into your garden, you need to make them feel comfortable and safe.

Yes. There are several models of squirrel-resistant bird feeders on the market. However, there is no such thing as an absolute squirrel-proof bird feeder.

The resistant designs make it very difficult for squirrels to access the bird feed. Squirrels are clever little creatures, though. If you get a persistent squirrel with a brain in its head, even the most resistant bird feeder won’t work.

The best thing to do is provide squirrels with their own feeders at strategically placed point in your garden.

Look for the points of entry such as from a certain tree or a part of your boundary fence.

This makes it difficult for squirrels to resist and pass by particularly when you put out food that squirrels love to eat.

An excellent feeder is the Pennington  Cedar Squirrel Feeder which can easily be fixed in place on your squirrels flight-path.

Keep them happy and well away from the bird table and restore harmony to your yard!

You will never keep them completely away from your bird feeders but at the end of the day it is great to see all types of wildlife.

Now you know more about the hidden life of the squirrels that live all around you.

Are you ready to start bringing these skittish creatures into your garden? 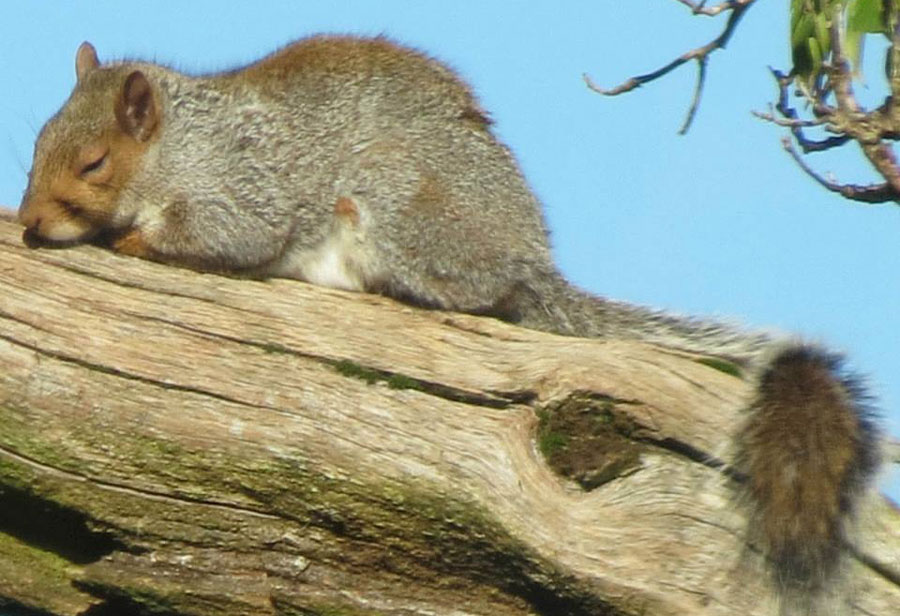 Which is the best food to feed squirrels?