.The best dog waste bags on offer here are the answer to safely and quickly clean up anything your four-legged friend has done.  The five top-rated dog poop bags listed have a large and very high rated track record on Amazon. 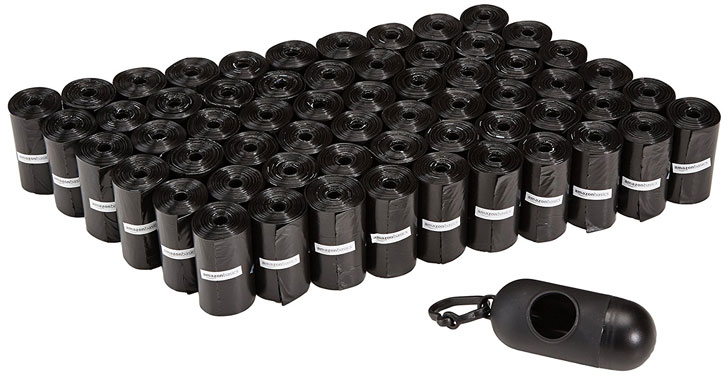 This is another great Amazon product where you get quality and a lot for your money.  They come in any color as long as it’s black! And for the small purchase price, you get 900 bags – enough to keep you in dog waste bags for well over a year!

The bags come with a black dispenser fillet with a leash clip so that you always have the dog waste bags to hand.  The bags are printed with an arrow/text to indicate which end to open which is also a bonus when you need to open the bag quickly.

As usual, Amazon has yet another brilliant product.  No nonsense, at low cost – what more do you want?! 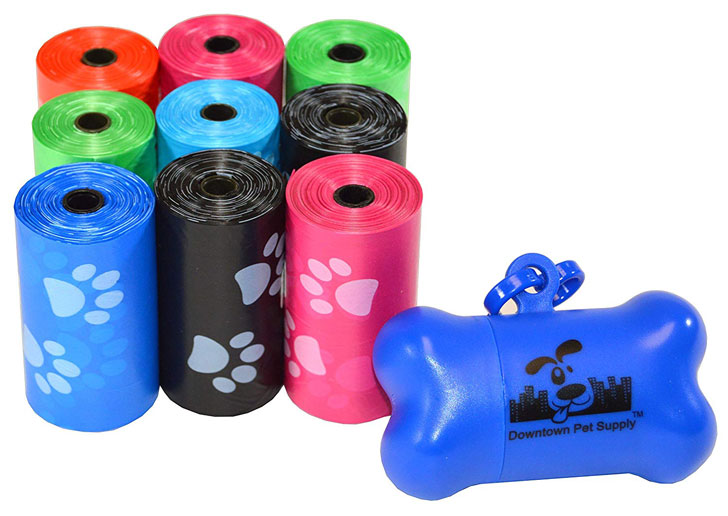 If you want more variety this choice of best dog waste bags gives you just that.  There is a choice of color, number and with or without paw prints on the bags.

There is a nice choice with the Earth Rated Dog Waste bags as they supply in scented and unscented bags and in two pack sizes.

The bags measure 13” x 9” fitting into any dog poop bag dispenser.  The box and bags supplied are all fully recyclable. 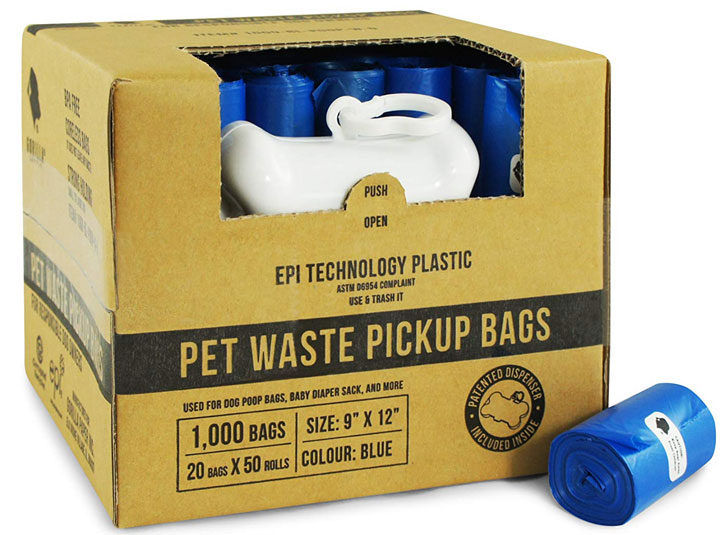 You get a lot for your money here with 1000 bags and a free roller dispenser to make things nice and simple when you need to dispense a bag.

Each roll of 20 bags fits neatly into the patented bone shape dispenser so that you can immediately pull off one 9” x 12” bag at a time.  It’s easy to click open the dispenser – refit a new roll of 20 dog poop bags and your good to go!  The bags come in blue only (as shown) 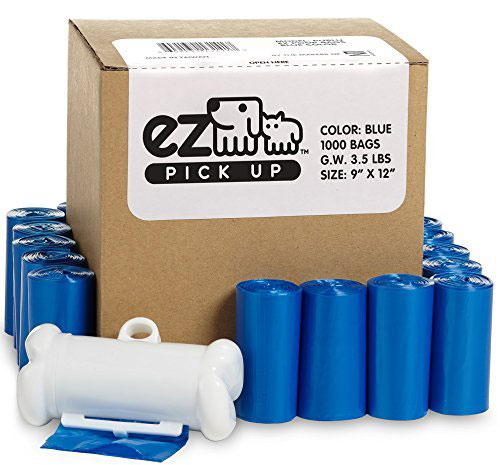 Last but not least is the EZ best dog waste bags with a free dispenser.  A no-frills package giving you 1000 dog poop bags for a very low price.

Comes with a choice of 5 colors – Blue, green, pink, brown and black.  The EZ self-tearing dispenser can either be attached to the leash or leash clip or a waist belt or shoulder strap.

This is a great economical package with a nice range of colors. 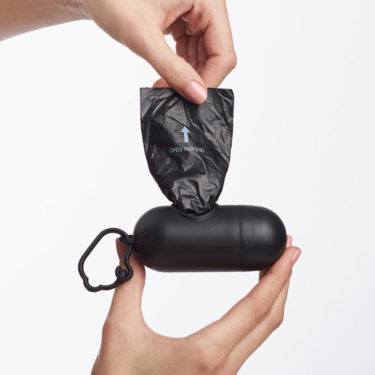 Conclusion – which are the best dog waste bags?

Let’s be fair about this – a dog waste bag is basically a plastic bag and you may think they would be much of a muchness.  However I have purposely looked at the rating on Amazon here and the best by far, with a rating of 5 stars and over 8000 reviews is the Earth Rates Poop bags closely followed by Amazons own brand with an overall rating of 4.5 stars and over 7000 reviews.

Dog Poop Laws – where did they originate from?

You have to travel back in time nearly 40 years to Nutley, New Jersey, where in 1971 a Great Dane was causing misery amongst local residents.  A Great Dane is quite a large beast and this one was making large deposits all over the local community.  The community was fed up of finding the dogs ‘gifts’ on their beautiful front lawns and spoke out.  The very first dog fouling law was passed making it a requirement to scoop that poop!

New York has a high percentage of dog lovers and it is now unimaginable to think that over 8 million New Yorkers and visitors were constantly treading in dog crap every day.  Thanks to the residents of Nutley, New Jersey who made the first stand the momentum began to gain pace.  It was quite difficult to get the initial laws passed in New York as there was such disagreement as to what action should be enforced and how.  After much debate and more pressure Mayor, Ed Koch finally made New Yorkers pick up the trail of the mess their four-legged friends were depositing.

Enforcement of New York Dog Poop laws is carried out by specific employees of New York City Departments of Health, Sanitation or Parks, and Recreation.  From 2012 the offense of not cleaning up your dog’s waste is $50 for the first time they catch you. 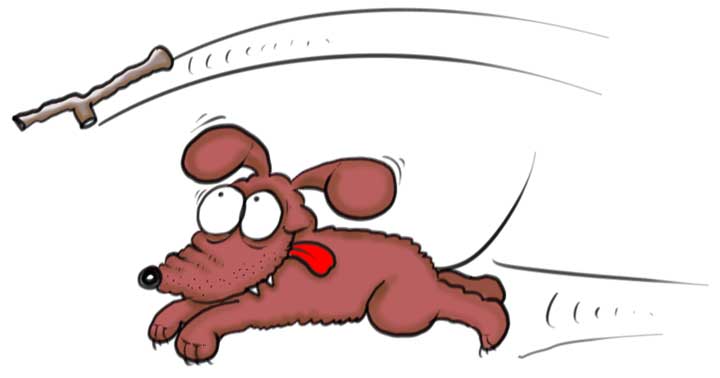 Why should we have to pick up dog poop?

If you have ever trod in dog faces you shouldn’t have to even think about the answer.  It is horrible, smelly, disgusting and totally unhygienic! Being a responsible dog owner is good for others, yourself, your dog and the environment.  Years ago, when it was the norm’ to let your dog do it’s business wherever it liked, It wasn’t safe for kids to play in parks or the street and it just looked awful and smelled bad.  Now you generally don’t see dog poop anywhere which has to be better?  Just imagine if it was ok for humans to go wherever we pleased – now there’s a horrific thought! 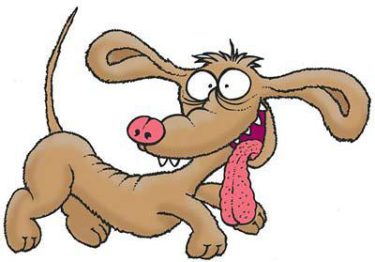 Yes, it isn’t the best feeling in the world to pick up dog poop but it’s a small price to pay for the damage that can be caused.  Dog excrement gets into the watercourses – streams, rivers, and lakes which in turn generates potentially lethal bacteria.

Dog poop on lawns and play areas can put your children at risk from all sorts of bacteria and parasitical invasion.  Disease can spread from dog to dog and even affect other wildlife.  The bottom line is that dog poop should not be on public display or left to cause serious harm to the others!

Leading by example was the ex-president of the United States. President Barack Obama once said in an interview “We go out and we’re walking and I’m picking up poop, and in the background is the beautifully lit White House. It’s quite a moment.” 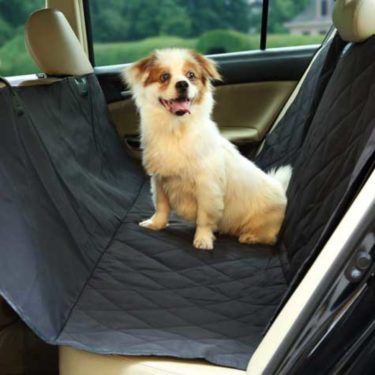 Is your pet making a mess of your car with hair, muddy paws, scratches and drool!

We review 5 of the best car seat covers here…