Llama Walking – Possibly the most bizarre and rewarding day out!

I was recently planning a trip to Yorkshire, England with my family when my wife spotted the number one best activity in the Harrogate area on Trip Advisor.

Was it a trip to the historical York Minster or perhaps to the York Chocolate Story to visit the site where chocolate bars were first made?

Could it be a trip to the Yorkshire Dales, a tour of the Jorvik Viking Centre or a mouth watering shopping experience to the oldest sweet shop in England at Pately Bridge?

Nope!…none of the above.  When she told me it was a llama trek I laughed out loud!

I didn’t laugh for long as the reviews on Trip Advisor were unbelievable.  When people say that it was the best day out they had ever had even though it was raining ‘stair rods’ then it must be worth doing.  I picked up the phone there and then and booked us in for a scenic farm trek with three llamas!

Nidderdale is on the eastern fringe of the Yorkshire Dales National Park about an hours drive west of York.  It is a stunning rural area with rolling hills, stone cottages, moorland, cows and of course llamas and is officially an Area of Outstanding Natural Beauty. 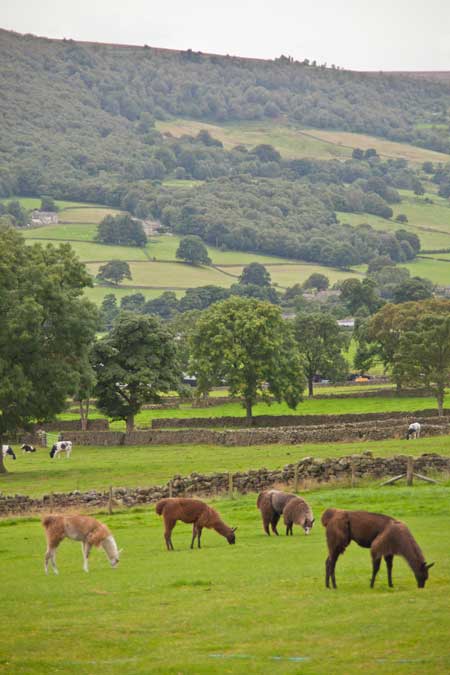 We arrived at Kiln Farm in the small village of Wilsill and were welcomed in to meet the llamas.  The owner of the farm and the person who  started llama and alpaca trekking in the Yorkshire Dales is Suzanne Benson. She explained how she had originally worked in social housing but longed to move into farming.

Her dream came true by way of a serendipitous decision when she and her husband were looking to buy a horse at an auction.  On a whim they bought a llama instead that just happened to be for sale.

Suzanne initially viewed the llama as a pet but got more interested in this rather unique animal.  She soon found out that llamas need company and from that met with the owner of another farm that offered llama trekking.  Lot’s of information was exchanged and so the Nidderdale Llamas came into being.

Suzanne admits that is wasn’t a roaring success to start with. However, it was inevitable that word of mouth would soon kick in especially for an activity which is rightly claimed in the Nidderdale Llamas brochure as Uniquely Different.

Nidderdale Llamas #1 Best Things to do Around Harrogate

Since 2012 Nidderdale Llamas has been been voted the #1 of 68 things to do in Harrogate and was awarded the Certificate of Excellence in 2016 by Trip Advisor.

Proof as they say is in the (Yorkshire) pudding and I have to say that our experience proved beyond any doubt that Nidderdale Llamas number one status was totally justified – Absolutely!

We booked  the Scenic Farm Trek which was a gentle trek around the perimeter of the farm for around a mile and a half – just about the right distance not to kill us off!  The instructors were brilliant telling us all about the llamas and alpacas on the farm.  A quick explaination…

Llama or Alpaca – What is the Difference?

Llamas and Alpacas are couisins in the Camelid family but there are some subtle differences between them.

The easiest difference you can see is that llamas ears are long banana shaped.  Alpacas have much shorter spear shaped ears.

The llama has a soft inner coat and a very coarse outer coat.  The Alpaca, on the other hand has a single coat which is very fine.

There are other differences such as the shape of the head and body with the alpaca being more compact and rounded. 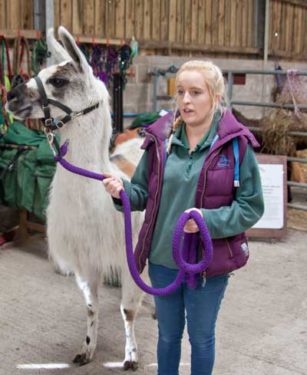 Back to Llama Walking

The instructor brought out several Llamas and Alpacas for us to meet and did an excellent job of removing any myths such as ‘spitting’ and gave us a chance to see what gentle and very friendly animals they are.

There was a young girl in our group who at first looked on with trepidation at these strange  beasts.  The instructor soon won her over and it wasn’t long before you could see that she was at ease with them.  Trekking is only available for over 10 year olds but there are other Llama activities available for 7-13 year olds.

What we didn’t know was that the instructor was looking at how we and the llamas were reacting to each other.  In other words we were speed dating a llama!  At the end of the introduction and safety instructions we were paired up with our respective dates!

Mine was ‘Jack’, a ten year old Llama who I thought at first looked a bit aloof (how wrong was I!!!).  My wife Jo was paired with ‘Bertie’ and my son Matthew with ‘Armani’ who had a bit of a goofy smile and a confident character that liked to lead the trek.

The instructor took a white Alpaca with her called Rufus who was being trained to trek. Basically she was getting Rufus used to other people, cows (which often poked their heads over fences as we passed) and traffic.  It was quite comical as everyone else had a llama which all towered above little Rufus. 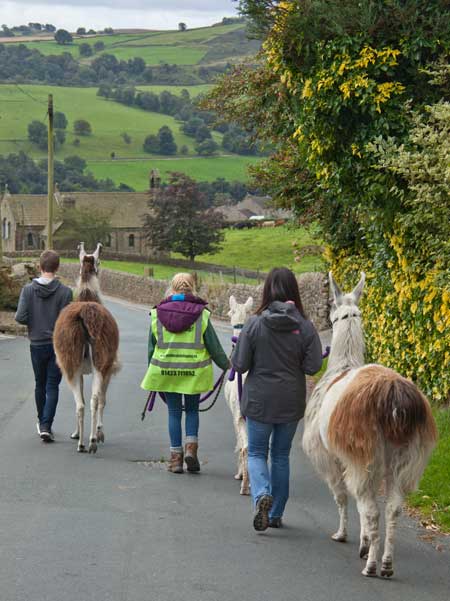 We lead our Lamas in convoy following a well trodden track out of the farm.  Each Llama had a bridle and soon we were on the country lane that led down into the village.

It was an absolute treat to see motorists faces as a trek of Llamas came into view.  We were warned that each llama would try their luck and start feeding off the verges and trees.  Mine obviously had the biggest appetite (polite way of saying Jack was just plain greedy!).

He tried his luck with grass, hedgerows, flowers in passing gardens and anything else he could bend his long neck towards.

I felt a bit sorry as I firmly told him not to and for a while thought we were going to fall out. However he soon got the message but always had one eye on me in case I forgot and gave him enough slack on the harness to reach a juicy leaf or two.

Within ten minutes you really get a good idea of what these magnificent animals are about and I really started to enjoy the trek. I made a point of talking to him all the way which seemed to build up a greater understanding between us.

Galloping to the Grazing Spot

We left the road through a gate and into a field of long lush grass.  Jack gave me a quick glance to see how much rope he had to play with and I gave him a knowing look back.  He had a pleading look on his face and I swear he whimpered slightly!

It was at that point that Suzane joined us.  She had just been interviewed by a local radio station, such is the growing popularity of the farm.  We were advised that the llamas would soon reach a point where we could let them graze for ten minutes.  We were also warned that the llamas were well aware of this and were likely to increase speed.

Jack has to this point been progressing at a ‘llama-amble’ but started to speed up significantly.  By the time we reached the alloted grazing patch I was vitually skiing on grass towed by a ravenous llama that would have put Usain Bolt to shame.

Jack totally ignored me when grazing.  It was if he would never see grass again hoovering up grass and was oblivious to all surroundings.  I let him get on with it and marvelled at his skill in scything grass with such precision and vast quantity.

The Llama Trek Varies Through Roads Fields and Narrow Bridleways

The next section of the trek was through some narrow walkways and we had to lead in front of our llamas.  I was a bit worried as I wouldn’t be able to see what Jack was up to.

I need not have worried as Jack must have eaten enough for now and behaved impeccably.  It didn’t last however as the path widened.  I could hear his stomach rumbling and then he looked my way and belched in my ear.  I am sure he was smirking when he did it.

After another grazing break and a short trek through another narrow walkway we were back at the farm where we were treated to tea and cakes.  We had been trekking around the perimeter of the farm for just under two hours and the time had flown.

It was at this point that I had a good chat with Suzanne Benson and I asked her about some of the problems looking after llamas and alpacas.

Surprisingly they are fairly easy to maintain and they have managed to find a vet who has proved to be really good with this ‘alien breed’ to the UK.  The vet in question is based in Thirsk and features in TV Channel 5’s ‘The Yorkshire Vet’.

There was a recent incident at the farm where one of the Llamas was injured and broke it’s jaw.  When the vet arrived so did the Channel 5 film crew and it featured in the first series. Keep your eye out in the second series as Nidderdale Llamas are featured again.

Incidentally the Skeldale Veterinary Centre is the former practice of James Herriot famed worldwide for his book series including ‘All creatures Great and Small’ and  ‘It shouldn’t happen to a vet’.

A Great Business Built up from Small Beginnings

Suzanne has built up a really good business from small beginnings and produced an experience that is second to none with reviews that most other attractions can only dream of.

Nidderdale Llamas offer a variety of parties and services such as half day and full day treks, hen parties, wedding functions, Education, Llama therapy and more.  If you ever take a trip to this area and you want to do something a bit different I cannot recommend Nidderdale Llamas more highly! 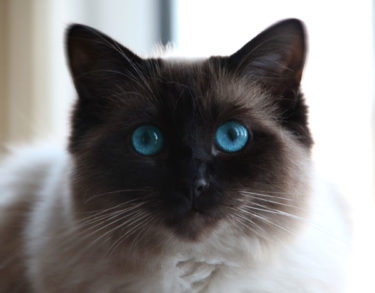 If you are looking for the ideal pet and love cats take a look at my article on ragdoll cats.

I have two ragdolls myself and are stunning looking, have a calm and friendly disposition and will follow you around your home like dogs.  Read the article here…